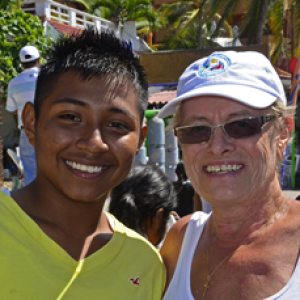 I have been a Sailfest volunteer for 14 years. I began helping at a tiny school on a mountain side over looking the town of Zihuatanejo called “Nuevo Creation”. It held classes in 3 wooden buildings containing grades 1-6. This school was started by a group of parents who wanted their children educated but did not have the money to have them attend a larger school in the town. This school was very basic.

As it began to crumble, Sailfest began to construct a concrete building with 4 rooms on a more secure property. This school was named “Octavio Paz”.

When it opened more children began to attend and so more classrooms were needed. These new rooms were built by the parents and were constructed out of wood. Much later they were replaced with concrete and hold well over 300 children.

Each year Sailfest has built many more schools in various locations around the area, as well as bathrooms and kitchens.

Over the years I have also sponsored 5 children through Por Ninos Adelantes to continue their education through to grade 12.

I am proud of the 3 boys who perservered and graduated. One young man is a qualified nurse, the other young man is finishing his degree in physcology! (The 3rd boy did not continue his education.)

As a retired teacher, Sailfest has continued to give me hope that these children will continue to have the opportunity to be educated and become self supportive for a more productive life.