Sailfest: It takes a floating village

Sailfest: It takes a floating village

Hello Friends,
As we Shelter-in-Place here in San Francisco Bay, due to the COVID 19 crisis, Margie and I wanted to share a Good News story about our time in Zihuatanejo, Mexico – December 18, 2019 through March 3, 2020.

Zihuatanejo, (known by locals and travelers alike as “Zihua”) is a magical place on the west coast of Mexico. For sailors, it is a popular anchorage with a “killer sunset.” 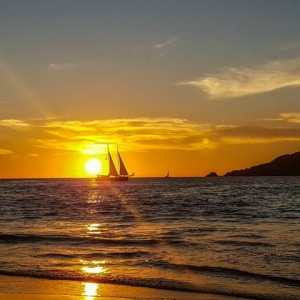 Our Good News story is about a group sailors working on Sailfest 2020.

You have all heard the expression; “It takes a village”. That concept probably doesn’t jive with your idea of vagabond cruisers independently braving the open seas, but we clearly identify ourselves as a “cruising community” and when together, we can definitely make things happen!

Sailfest started in 2002, when a small group of cruisers anchored in Zihuantanejo joined with local residents and expats to raise funds to build a bilingual classroom for indigenous children. Since then, every year in February, cruisers from around the world have been coming to participate in Sailfest.

Margie and I anchored S/V Peregrina in Zihuatanejo Bay back in 2017 as we were making our way to California. That year, we worked on Sailfest for two months and had such an amazing experience, we vowed to return. This year, we made good on our commitment. However, we returned by plane rather than aboard Peregrina.

When we think of little children around the world, we wish their lives were worry-free, or that their biggest concerns were whether they would have pancakes or waffles for breakfast, pass a math test or make the soccer team. 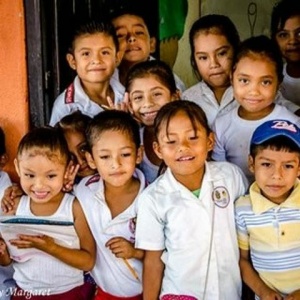 Most children in Zihua have other worries:

– They worry about their parents having a job

– They worry about whether they will even GET breakfast, lunch or dinner today

-They worry whether there even IS a neighborhood school

Every year, in collaboration with the non-profit organization Por los Ninos, cruisers from around the world host an event called Sailfest to help alleviate those worries.

There is a simple focus to Por Los Ninos: It’s FOR THE KIDS…and helping them get an education. 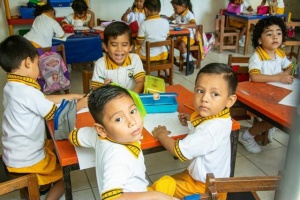 And there is nothing more fun than being in a room full of kids at school. Margie and I blended right in! 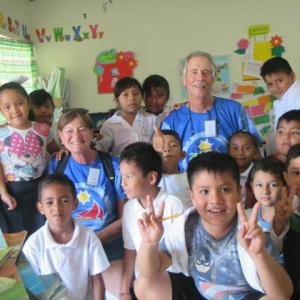 As of December 2019, Por Los Ninos has built 131 classrooms, bathrooms, kitchens and playgrounds including 14 entirely new schools and expansions or repairs to 29 existing schools. 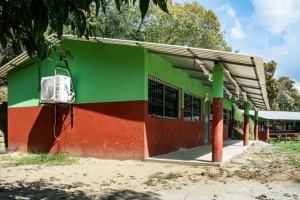 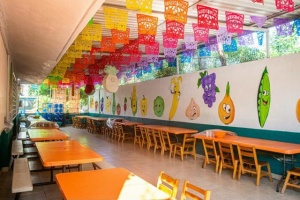 Below is one of my favorite photos. It shows the school Centenario De Revolucion. In the top part is the original school, then the first phase of construction years later and what it looks like now. What a difference! 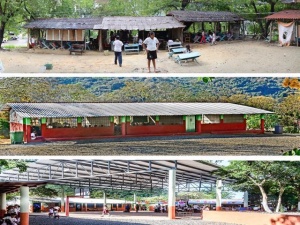 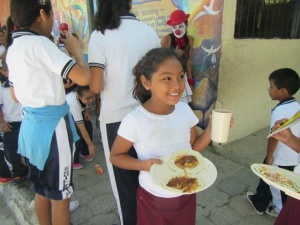 How is this all paid for?

Throughout the year, volunteers at Por los Ninos work tirelessly to raise funds for school projects.

But, their largest fundraiser of the year happens in February when the cruisers arrive for Sailfest!

Let Margie tell you about our experience this year…

“Because we arrived in Zihua in December to celebrate Christmas with our extended family, Peter’s Sailfest job started in early January this year. He was tasked with obtaining donations from the retailers, restaurants and hotels in the downtown “tourist” section of the City. These businesses donated items such as a 500 Peso coupon towards a meal. a scuba-diving trip, a bottle of tequila or a vacation stay at their hotel. In exchange, they would get a “Hero Certificate” which was placed on the outside of their business encouraging tourists to support their establishment. The donations were given away in raffles, silent and live auctions during Sailfest 2020.

This was a great opportunity for Peter to practice his Spanish as he spent HUNDREDS of hours talking to local business owners and the “village” responded. More than 95% of the business gave what they could. “Hero” signs adorned each street and alleyway.”

In mid-January, the Sailfest 2020 Sales & Information Desk opened. Margie and I spent many hours working the desk, which was open seven days a week, eight hours a day. The sales team sold tickets for activities both on water and on land. Here we both are with our 2020 Sailfest T-Shirts on ready to answer questions. 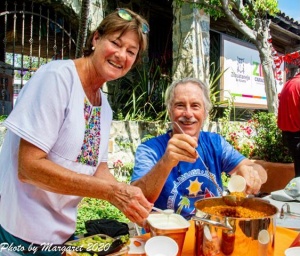 There were so many activities to choose from! In fact, “visitors-in-the-know” now schedule their vacations around Sailfest because there are so many fun events going on every year! Sailfest hosts concerts, dances, art shows, street fairs, beach parties, English High Tea, Champagne Brunch, Chili Cook-off and a Gala Dinner.

One of the highlights of the week is a special visit to the schools where you get to meet the children and their teachers, see them perform and tour the facilities made possible by donations to Por los Ninos. Look at these darling faces as the girls present their welcome Pineapple Dance! 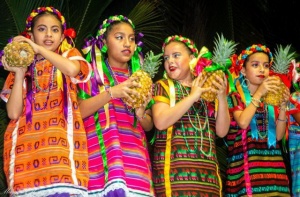 Margie volunteered to participate in the Chili Cook-Off against 20 other contestants. (Actually, Peter volunteered her when she wasn’t around!) She made a white bean chicken chili which was very popular in the “People’s Choice” category, but did not win the top prize. There seemed to be a preference for red meat tongue-blasters which were “muy picante” (very spicy) but, that was probably to be expected. It was a really fun day and we served over 200 paying guests!

One of the key revenue generators at Sailfest is the opportunity to go sailing, of course. As we noted, beginning in January, Zihuatanejo Bay starts filling up with sailboats. Every day, at 4pm paying guests (tourists and local residents) go out for Sunsets Cruises around the bay and, if they’re lucky, to see some breeching whales. It is always a magical evening. The cruisers volunteer their boats and all the proceeds goes to Por los Ninos.

In 2017, Peter came up with the idea to host Music Cruises as another way to bring in extra money for Por los Ninos through Sailfest. He figured out that one of the best parts of staying in Zihua is the wealth of local musical talent and that guests aboard our Sunset Cruises would love to have a private concert in the Bay. Sailfest now hosts classical music, blues, country, rock and roll and traditional Mexican/Spanish guitar cruise options. This year, a dozen amazing artists volunteered to play and guests got up close and personal with their favorite musician. Two or three boats raft up together after an hour or two of sailing and the concert begins. In the picture below, the guitarist is playing in front of the mast. It doesn’t get much better than this! 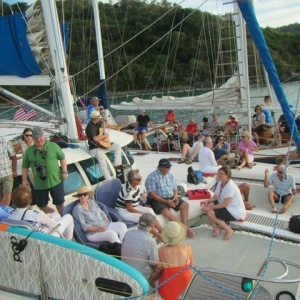 Here is our friend, classical guitarist, Carlos Uribe, on one of his music cruises as the sun sets. 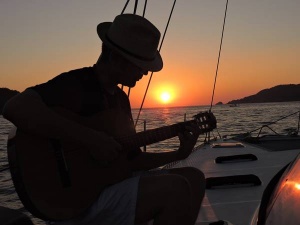 In addition to the Sunset cruises, we host a “Rally-Round-the-Rock” which is a semi-serious race with hundreds of paying guests aboard the boats. (Actually, there is no such thing as a “semi-serious” race because, deep down, there is a competitive gene in almost all cruisers whether they are willing to admit it or not!) 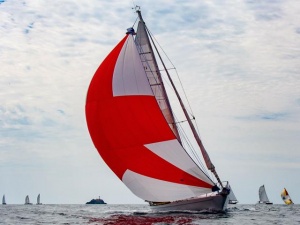 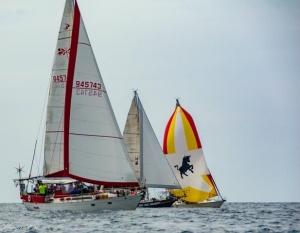 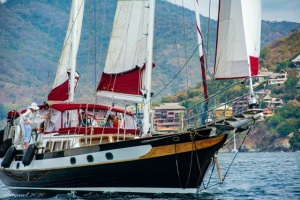 Another popular activity is the Sail Parade from Zihuatanejo Bay to Ixtapa and back. We sailed with our good friends, Stephane and Mark aboard Wainui with a dozen paying guests and had a fantastic time. We saw dolphins and whales breeching and made a two-hour beach-break at beautiful, little Isla Ixtapa before heading back to Zihua. 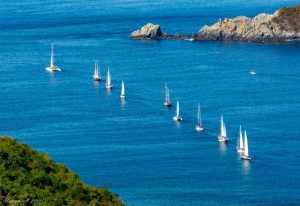 All told this year, the cruising community took 1,450 paying passengers aboard private sailboats (and two powerboats) raising 670,000 Pesos which translated to approximately $37,250.00 USD!

Sailfest 2020, as a whole, raised a total of 3 MILLION 200 THOUSAND PESOS which is almost $178,000 USD – an all-time high! This will build a lot of school rooms, kitchens, bathrooms, science labs and sports facilities in the coming year.

This year, we decided to become Scholarship Parents for a terrific young woman. Her name is Daniela Molina. We were introduced to Daniela by the Por Los Ninos President, Carol Romain. Because poverty often ends the educational dreams of smart, motivated students, Por los Ninos offers opportunities for donors to provide scholarships to a limited number of deserving high school graduates who are destined to go on to be tomorrow’s community leaders.

The first time we met Daniela we fell in love with her. We had long talks and, on other occasions, spent time with her parents, brother and sister. Her mom runs a small convenience store that is open seven days a week, 12 hours a day. Her dad is a mechanic, yet they struggle to make ends meet.

Daniela is a second-year nursing student at Centro de Estudios Universitario in Zihua. She is a serious student, very focused and has excellent grades. Her wish is to work in Pediatrics or in a hospital’s Emergency Room. At this time, her school is closed due to the COVID 19 crisis and she is studying remotely . We couldn’t be prouder that she chose the medical profession – especially in these challenging times. As we emerge from this crisis, the world will need more Daniela’s dedicated to saving lives! 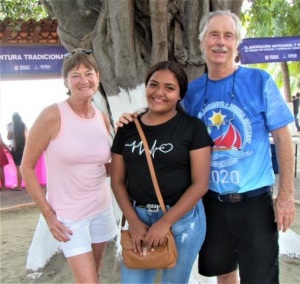 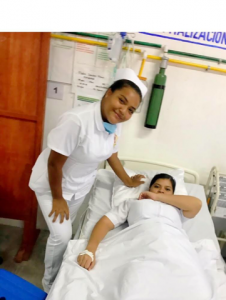 So, we hope you agree that there are still plenty of good things happening in our world and now, more than ever, we are convinced that it truly does” take a village” (sometimes a floating one!) to make a difference.

Our best wishes to you, your family and your loved ones. Stay safe, wash your hands and practice social distancing!

Virtual Hugs and Kisses from Margie and Peter

P.S. We really love to hear back from you but please don’t hit “reply” as that sends all the pictures back. Send a separate email. Please do write!