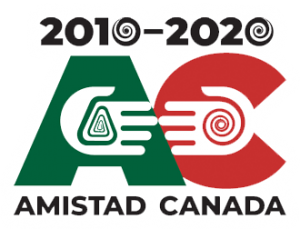 We had125 donors who raised $7561. CDN for the Rice and Beans Program with 12 participants. None of this would have been possible without the hard work of Cindy Dainhard who volunteered to coordinate the project from Zihuatanejo.

Amistad Canada ended up as the 20th highest fundraiser for the entire event, which is incredible for 7 small-town Mexican charities to pull off. Up until November 18th, we were the second-highest fundraisers of the seven. The charity raising the most was from La Manzanilla, with a population of 2,000, and had 2 families donate almost $9,000. The group from San Miguel de Allende, who overtook us, had over $2,000 in donations come in from a handful of people after the 18th. What I’m trying to say is that these folks had some very heavy hitters donating very large amounts, and our participants did it the hard way, earning it bit by bit, with every $25, $50 or $100 donation. They seriously worked for it!!!

Thank you to everyone who participated and or donated, this year of all years the extra influx of cash really helped. We are still feeding the people of Zihuatanejo, less than before but there is still a need especially for baby formula.

I think even if next year’s Marathon is not virtual, we should do our own. Cindy has it down to a science now!

Thank you so much Cindy for all your hard work, you are amazing!!!