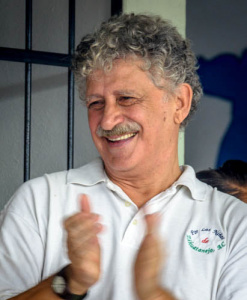 It is with heavy hearts we announce the passing of our dear friend Lorenzo Marbut. He passed peacefully in his sleep. He came to Zihuatanejo and fell in love with the children and their big brown eyes. At the request of the Bellack’s became the administrator of Por Los Ninos and devoted many years to improving impoverished schools.

Lorenzo was an avid reader of nearly everything in print. The library at Centenario de la Revolucion Primary bears his name.

His ashes will be laid to rest at the Plantel Bachilleres High School in Zihua, a project Lorenzo was so proud of.

His legacy will live on with the many students who benefitted from a better education as a result of his work with Por Los Ninos del Municipio de Zihua.

Lorenzo will be missed!