Sailfest – The most rewarding thing I have done as a cruiser 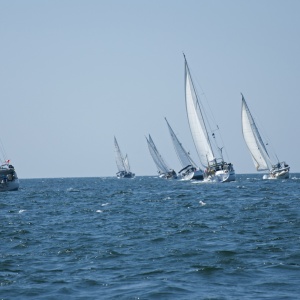 Each fall, the migration begins and seasonal cruisers come back to Mexico, preparing to sail south. Some head to the Sea of Cortez, and others explore the west coast of Mexico, usually traveling between San Carlos and Zihuatanejo. Everyone looks forward to catching up with old friends and the excitement builds as we discuss our plans for the adventures that lie ahead.

Recently, there has been a considerable amount of buzz around Zihuatanejo. We had heard a lot about the International Guitar Festival held each year in March, but not so much about Sailfest. Until this past year, that is. “Are you going to Zihua?” Our friends asked us. “Zihuatanejo is so cool! You will love it.” Others chimed in with, “You have to go to Sailfest! It is the most rewarding thing I have done as a cruiser.”

Sailfest is advertised as a week-long festival, held every February, raising funds for Por Los Niños, a non-profit organization that has supported the education of the least-advantaged children of Zihuatanejo for over seventeen years. Por Los Niños, along with the help of local and international communities, has a history of success in that they have not only built classrooms, they  have built entire schools. Two years ago, they built the first new high school, Colegio de Bachilleres, in twenty years with the intent to bring back children who had dropped out for one reason or another. The dropout rate in Mexico is high. Only 27% graduate from high school and out of that, only 11% go on to university. This year, 21 out of 34 students graduating from Colegio de Bachilleres are going on to university. That is six times higher than the national average.
Sailfest offers a myriad of events, mostly surrounding the cruisers’ taking out guests on their boats for a few hours of sailing. The schedule also includes a chili cook-off, silent and live auctions, a benefit concert and gala dinner. Two special sailing events are the Sail around the Rock which is a cruisers’ race/rally and the finale, The Sail Parade, starting in the bay of Zihuatanejo and ending at Ixtapa where we salute the Port Captain. The committees that work for Sailfest are a well-oiled machine and very professional. So much so, at the end of the event, the volunteers are provided with a complete accounting of all monies raised and spent.

With all the hype around Zihuatanejo and Sailfest, my husband, Jay, and I decided to see for ourselves. We left Nuevo Vallarta and sailed the 363 nm south.

Zihuatanejo Bay is quite large and in the shape of a horseshoe. The town of Zihuatanejo lies in the center. To the right of the horseshoe are two popular beaches, Playa La Ropa and Playa Los Gatos. To the left are private homes and a few restaurants. Hills rise up behind the coastline surrounding the cove.

We arrived in the bay on January 31st, just before sunset. It was a sultry evening and we were tired. We dropped anchor, had a glass of wine and watched the sun go down. The hills began to glisten as the white lights twinkled from the houses perched on the cliffs. It was a beautiful sight.
We found the merchants to be warm and welcoming and they cater to the cruisers. Maybe this is because we boost their economy. Maybe it’s because they appreciate our efforts to help raise money for the education of their children. Maybe it’s both. Whatever the reason, they provide a much-needed service to those anchored in the bay.

Ishmael – stationed just off the pier – can help with almost anything. He will deliver, fuel, water, beer, even laundry to your boat. On shore, there are “dinghy valets.” Four men who have made their living by working on the beach. For a minimum of ten pesos (each way), they will help pull your dinghy in and out of the water. They are there 24-7 and watch over the boats while we are in town. They are a fun bunch and we enjoyed getting to know them.

Zihuatanejo turned out to be more of a big city and less of a sleepy village than we expected. Yet, town Centro still retains the charm of a small fishing community, witnessed by the fishing co-op we passed daily when walking the Malecon. As is common in every Mexican town, the Malecon runs along the shore. What is different are the palm trees lining either side, creating a canopy of shade and an intimacy that adds to its’ allure. There is no town square either, with the requisite park in the center and a church and civic buildings on either side. Instead, there are several diagonal streets designated only for pedestrians. The streets are narrow and the restauranteurs set-up their tables outside where customers can enjoy dinner under the stars. This also adds to the intimacy and charm of the village.

Zihuatanejo seems to draw great musicians too. Whether it is a salsa band playing on the beach, a guitar duo at dinner, or a jazz band at a night club, we found the music scene to be top notch. They are also civic-minded and welcomed the opportunity to volunteer for Sailfest.
The morning after we arrived, we wandered over to the sales desk camped out on the Malecon. (Open every day from 10-6 and manned by volunteers.) Since Sailfest wouldn’t officially start until February 5th and this was February 1, we were surprised to find out that they had been selling sunset sails for two weeks prior to Sailfest, as well as the week of Sailfest and would continue into the week after Sailfest. And not only sunset sails. You could offer your boat for any kind of sail you wanted to share, such as a wine and cheese cruise, or a day sail, or the ever-popular music cruises. This is where local musicians offered their talent. Tim and Donna Melville, the chairs of the cruising committee, organized three boats who were willing to raft up together. The middle boat would host the band. Tim and Donna had their hands full keeping up with the demand, but because of the generosity of the cruisers, the sailing contingent, alone, raised over $500,000 pesos.

Jay and I volunteered our boat for several of the sunset cruises, the rally and the parade. Tim explained that we could take as many people as we felt comfortable with or as few. Some people took six. Others took ten. The music cruise boats usually had at least twenty on board. We decided eight guests was a good number for us.

We were a little nervous about taking strangers out on our boat. Would they get seasick? (No one on our boat did.) Would they have a difficult time boarding our boat out at anchor? (Yes, many did.) Had they ever sailed before? (Some, yes. Some, no.) We wanted our guests to have a good time and at the same time, we wanted to keep them safe. As it turned out, all our guests were a whole lot of fun and had a delightful time. Every single group sang for us. One gentleman even brought an Irish drum and led us in sea chanties.

The official week of Sailfest opened with a welcome beach party and ended with a parade. That was one of the highlights for me, seeing 31 boats “dressed up” and all in a line. The other highlight was visiting the high school. One of the board members of Por Los Ninos, Lorenzo, took us on a private tour of the school. We jumped into three vans and drove through city streets until we came to a hill. From there, the vans climbed the hill on rocky, dirt roads that weaved around and around. When we arrived, the principal spoke and the children performed a cultural dance.

Meanwhile, two students served the volunteers a shot of mescal. It is the only high school I know of that lets the children serve alcohol and dance with machetes. In all seriousness, the school is impressive and just this last year added a computer room with ten computers and air conditioning.

We spent three weeks in Zihuatanejo and during our visit there were so many activities for the cruisers, I can’t possibly list them all. A couple to note were the Shot and Shave day for the men and the Sip and Swim day for the women. The grand finale was a special gift from the President of Por Los Ninos, Gloria Bellack and her husband, Richard. To show their appreciation for the volunteers, they hosted a thank you party at their home on Playa Blanca. We were served delicious food with an open bar and live music, complete with an infinity pool set against the Pacific Ocean and a sparkling, white sandy beach. We were stunned by their generosity.

When all was said and done, we were exhausted but elated at our accomplishment. The entire month-long event raised over two million pesos. It took a lot of work and not just by cruisers. There are many local residents who donate their time and resources to the people of Zihuatanejo throughout the year. It is quite a community and we were proud to be a small part of their philanthropy.