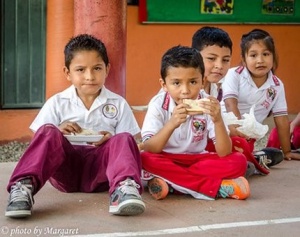 Arriving in November, we had a chance to settle into “Zihua” just before high season was kicking into gear. Our first encounter, literally, was with Larry “Lorenzo” Marbut, who helped drag our dinghy ashore and asked, “Are you Margie and Peter?” Whoa!! Talk about our reputation preceding us!!

Actually, I had written ahead of time to an organization known as Por Los Niños which sponsors Sailfest in order to volunteer our help for the February event and Lorenzo, as Administrative Director of this non-profit, was not going to let an opportunity to sign up two new recruits pass by! He swept us up under his wing and, as they say, the rest is history…

Over the course of the next three months, we visited schools that Por Los Niños had built or remodeled; participated in ribbon-cutting ceremonies for new classrooms and kitchen/dining facilities; attended a holiday party for the poorest children fed by a Por Los Niños program called “Carol’s Rice and Beans”; practiced reading and writing in English with the kids and helped distribute books, school supplies, backpacks and clothing. Everything was provided by Por Los Niños supporters around the world and, to a great extent, from the proceeds derived from the annual cruiser-driven Sailfest celebration which was February 6-12, 2017.

This year, over 70 volunteers and more than 25 boats participated in the event and, when the final accounts were tallied, Sailfest 2017 raised more than 1 million 750 thousand pesos for Por Los Niños! That’s approximately $83,350.00 US dollars which is a huge amount in Mexico!

All this revenue is invested back in the community, with administrative costs at less than 1% – truly a volunteer effort and a labor of love!!! 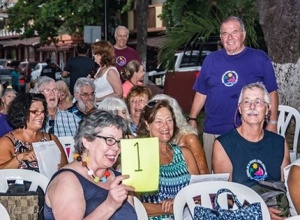 Peter and I were so proud to be a part of this effort and, especially, this year because we learned that interest among the “yachties” had waned in recent years. Participation by the cruising community had dropped off and, more and more, the leadership for this event was back in the hands of the “ex-pat” landlubbers.

But, this year, the “yachties” put the “SAIL” back in “SAILFEST!!” Over 25 boats (both sail and power) showed up in the anchorage in the weeks leading up to the celebration and EVERYBODY wanted to help!

For our part, Peter led, and I served, on a Donations Committee consisting of teams that collected hundreds of items from local businesses, restaurants and hotels which would be used as raffle prizes or auctioned off to the highest bidders in both live and silent auction events. 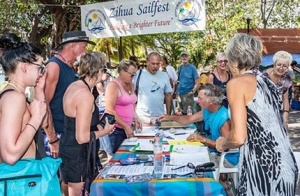 The sign-up desk to register for events, sailing excursions and to buy Sailfest logo-wear was busy from morning ‘til night!

Land-based tourists were quick to sign up for an opportunity to go out with the yachties for sunset cruises. For a nominal donation, groups from 2-20 were treated to a cruise around the bay. Many had the thrilling opportunity to see humpback whales! Several of the larger boats hosted “custom cruises” featuring musical entertainment. Peter came up with this great idea after a night out in Zihua listening to some amazing music. He and I co-hosted a classical guitar cruise with local legend, Carlos Uribe aboard S/V Catatude, owned by our friends Tom Wurfl and Helen Downs. We served fancy Blue Margarita’s to our guests along with light hors d’oeuvres. It was a magical evening! 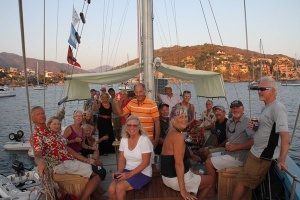 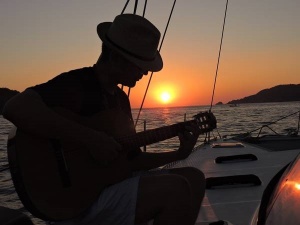 There followed a couple of “Blues Music Cruises” and several more boats hosting renowned Mexican musicians – all who volunteered their time for a good cause. Over 600 visitors took advantage of this opportunity and many new friendships were made. These special events raised over $285,000 pesos (almost 14K) and all the proceeds went directly to Por Los Niños.

The English boat, S/V Fantasia graciously hosted a dozen cruises and deserves the award for outstanding effort! Below you can see all the “yachties” gathered together on Fantasia for a farewell party. 19 dinghies tied up alongside – 40+ revelers onboard! A good time was had by all… 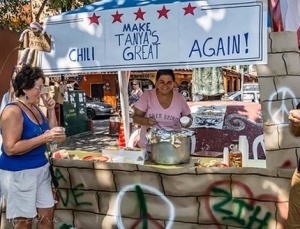 Among the other Sailfest events was a delicious Chili Cook-off with 12 entrants vying for the title of Chili Champion 2017! Participants provided two gallons of mouth-watering and sometimes, five-alarm, fire-burning chili which was eagerly sampled by the public who made a donation to Por los Niños in order to cast a vote for their favorite recipe and crown the Chili Champion.

And, of course, it wouldn’t be a yachting event if there weren’t dancing! I might be going out on a limb here but cruisers have to be in the running for the best group of dancers in the world! Turn on music from the 60’s, 70’s and 80’s and we’re on the floor “all night long” as Lionel Richie would say… 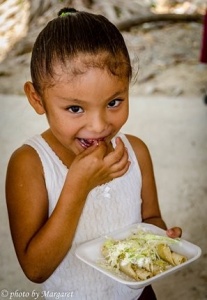 Once again, the band M Dock from Springfield, Missouri flew in to perform their 16th annual concert for the usual sold-out audience at Sailfest. These guys were amazing and have donated their time and all-out effort every year since the beginning. We danced the night away at the Casa de Cultura and the Mayor awarded the band a certificate recognizing M Dock’s efforts to support the children of Zihuatanejo. 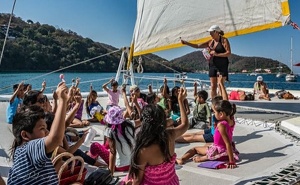 The kids in the photograph are aboard the excursion boat, Picante, which also donated their services and time to lead the 2017 Sail Parade from Zihuatanejo to Ixtapa. These students were rewarded for having the highest GPA’s in their class at the Casa Pacifica Hotel’s tutoring school, where a Sailfest program called Carol’s Rice and Bean’s provides more than 35,000 healthy meals a year to the poorest students who would otherwise go hungry.

During Sailfest, cruisers, as well as land-based visitors to Zihuatanejo, have the opportunity to visit the schools that Por Los Niños/Sailfest supports. I should point out that there is never any distribution of cash funds. Por Los Niños receives requests from schools outlining a specific project or program and, upon discussion among the Board of Directors, the materials needed for completion of each project are purchased through Por Los Niños. In the photo below Margie is helping out with a reading class.

Por Los Niños obtains the raw materials for construction; purchases the school supplies, uniforms, sporting equipment and/or musical instruments; raises the funds to buy the ingredients for healthy meals and oversees the implementation and distribution of all these items along with school administrators and committed parents. Here is a new computer lab in the high school.

One of the schools visited this year was the new Colegio de Bachilleres High School, built in partnership with the city government and Zihua’s business community.

It was the most ambitious, single-year project in the history of Por los Niños and the first new high school in Zihuatanejo in 20 years. Many of the highly motivated students who had been accepted in this advanced academic program were former students who, due to adverse circumstances such as drug abuse, unplanned pregnancy, financial hardship or gang/cartel affiliation, had dropped out of school. The funds generated from Sailfest 2016 and distributed through Por los Niños gave them a second chance at a high school diploma and, possibly, further education in college or technical school. 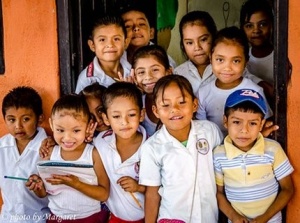 Por Los Ninos’ Board of Directors is already meeting to determine this year’s projects. If you would like to learn more or, perhaps, contribute to the good work they are doing, check out www.carolr7.sg-host.com. Contributions are tax deductible in the USA. Peter and I will keep you posted on the work as it happens!