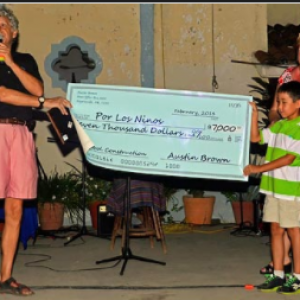 Austin is a member of a volunteer group from Springdale, Arkansas that visits Zihuatanejo during the Summer season to put the finishing touches on our newly-built classrooms. They install lights and fans; paint the buildings inside and out; and landscape the grounds with patios and flowering plants. This church group, led by Rotarian Chris Weiser, personifies the hard-working, can-do spirit we have come to expect from our compassionate volunteers.

Austin was touched by the plight of Zihuatanejo’s impoverished children and has decided to take his volunteerism to the next step. He has committed to raising the approximately $21,000.usd necessary to purchase the building materials for the new school and bathroom. The City of Zihuatanejo, and the parents of the children, will provide the construction labor.

This year, at the Sailfest 2013 wrap-up party, Austin presented a $7,000. check to the organizing committee; the first installment toward fulfilling his dream. He estimates it will take him two more years to complete his project. Austin earns these funds selling “Austin’s Fun Snow” at trade shows, and by donating his personal savings to his cause.